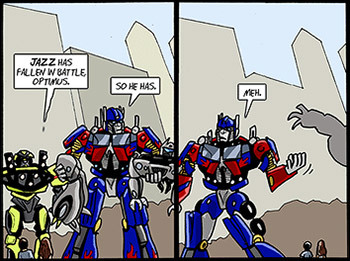 "Look Barry, the only way to respectfully honor Frank is to completely forget about him."
— Carl, Sausage Party
Advertisement:

Heroes often have to be motivated to pick up The Call, or are simply forced to by chilling events. An all too common way for this to happen is to have their friends and loved ones become Friendly Targets and suffer Death by Origin Story to kick start their quest.

They will thrash and wail, swear bloody vengeance on their killer and go on a multi-season quest to avenge... who was it again? Bob? Alice?

This trope is about the tendency of a narrative to have heroes forget their fallen friends and loved ones with worrying ease. This is both mental and emotional; heroes will rarely reflect on these losses, or even use them in an "And This Is for..." speech, and the emotional impact of the loss is rarely ever shown afterward. (And not because they are bottling it up.)

This can manifest as a husband avenging his murdered wife who hooks up with the first Action Girl he meets without the smallest bit of guilt, or an orphaned son who quickly puts his parents' smoldering remains out of mind to have fun with his new Five-Man Band. The hero might even easily forgive the culprit without batting an eye. Depends On The Writer, especially on a Long Runner where there are often loads of them; if the writer can't remember a character, there's no chance in hell that the characters will.

Granted, a character can't be moody and depressed forever, as it would get really old, really fast, but in moderate doses it's actually compelling drama to see them bury their grief and perhaps even forgive (or at least not want to murder) the killer and instead bring them to justice. However, when the dearly departed's loss has all the emotional impact of a Red Shirt or Disposable Woman dying, it can nudge uncomfortably outside of the Willing Suspension of Disbelief Zone.

This trope is also useful for killing a Sacrificial Lamb off in the beginning that the author doesn't want to appear as a main character in the rest of the work, whether to avoid Fridge Logic, or to lessen the burden of the hero on their Heroic Journey. Taken further, the character may be killed off before the story starts and get referenced only in a Troubled Backstory Flashback.

In episodic series, this will always happen to Remember the New Guy? if they die. Just as how they were never mentioned before the episode despite being close friends with one of the main characters, their tragic death will never be mentioned again after the episode.

Contrast Dead Guy Junior, To Absent Friends, He Had a Name and see also Death by Origin Story. When a character simply goes missing, with their ultimate fate unrevealed (to the other characters or to the audience,) yet nobody (in the story) seems to care, it's What Happened to the Mouse? or Chuck Cunningham Syndrome. When it's the villain who can't remember... whoever it was he killed that has made The Hero mad at him, it's But for Me, It Was Tuesday. Compare Present Absence, when this is averted.

Played for Laughs; Milton is shot and killed by Corto Maltese Military troops. However, while Poka-Dot Man mourns him, Bloodsport forgot that he tagged along whereas Harley Quinn forgot who he was, much to Polka-Dot Man's dismay.

Played for Laughs; Milton is shot and killed by Corto Maltese Military troops. However, while Poka-Dot Man mourns him, Bloodsport forgot that he tagged along whereas Harley Quinn forgot who he was, much to Polka-Dot Man's dismay.