Set a Mook to Kill a Mook 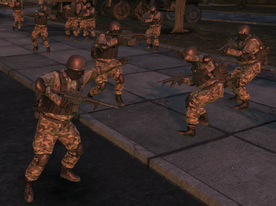 That's him! He's the one you want!
Advertisement:

This is predominately a gaming trope, but may pop up elsewhere. In gaming, this is a specific type of Status Effect.

In a lot of games, there's a way for the heroes to trick the baddies into fighting each other.

With Mecha-Mooks like robots and gun turrets, this is typically accomplished by "hacking". Usually this involves creeping up to them and using a skill or playing a Hacking Minigame, or finding a computer terminal which controls their AIs. Less commonly, a special ranged attack might scramble their circuitry, or a called shot might take out their "differentiating between friend and foe" chip.

For Mooks made of meat, games may offer a wide range of charm, confusion, berserk, and possession effects. These are typically used to whittle a large group of foes down to one guy, who will probably be injured and wondering what the hell just happened.

In some games, a Mook who gets injured will immediately and deliberately return fire on all offending parties without any influence on the player's part. In these games, it is sometimes possible, through speed and agility, to trick bad guys into picking fights with each other in the best traditions of the Circular Firing Squad. If it is impossible for one mook to injure another (even accidentally), that's Damage Discrimination.

Note that this only includes situations contrived or exploited by the player. If a stupid enemy simply keeps bouncing grenades off an obstacle and standing there as the grenades explode at its feet (or stands there as grenades thrown by an ally explodes at its feet, or indiscriminately throws grenades even if allies are nearby), that's Artificial Stupidity. When different preexisting factions of Mooks fight each other as well as the player character, that's a Mêlée à Trois.

Compare Let's You and Him Fight, when single characters are pitted against another, and Divide and Conquer. Sub-trope of Evil Versus Evil.

Compare Draw Aggro, a mechanic where you bait certain opponent(s) to fight you; this trope is a variant of that where you make one of the foes draw the aggro towards themselves.

Sly and Bentley pit Interpol and the Vincenetti Gang against one another in "Turf War!" so that Carmelita would get rid of Octavio's security team for Carnivale.

Sly and Bentley pit Interpol and the Vincenetti Gang against one another in "Turf War!" so that Carmelita would get rid of Octavio's security team for Carnivale.