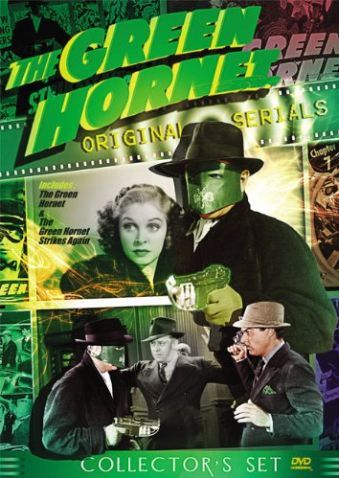 In 1940, George Trendle brought his popular radio drama The Green Hornet to the movie screen. The first serial, simply titled The Green Hornet, starred Gordon Jones as Britt Reid/The Green Hornet, Keye Luke as Kato, Anne Nagel as Reid's secretary Lenore Case, and Wade Boteler as reporter/bodyguard Mike Axford. After one chapter showing why Reid took on his masked persona, he got down to business hunting racketeers and trying to find the head of the city's criminal organization. This serial ran for thirteen chapters.

The formula worked well enough that it was used again in the second serial, The Green Hornet Strikes Again! (1941). While Reid (with Kato) was on vacation in Hawaii, a new crime syndicate formed back home. They sent an assassin to Hawaii to kill Reid, in hopes that they could then take over his newspaper "The Sentinel" and end its crusading approach to the news. All they accomplished was to let Reid know it was time for the Green Hornet to get back to work. In this serial, Warren Hull played Reid/The Green Hornet; the other main roles were unchanged. The serial ran for fifteen chapters.

Digitally-restored versions of both serials were released on DVD to celebrate the 75th anniversary of the character.

These serials contain examples of: