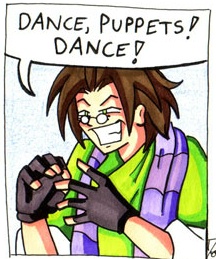 He always wanted to say that.
Advertisement:

is a webcomic started by Michael "Mookie" Terracciano on May 21, 2002. It follows the life and times of Dominic Deegan, a messianic yet pessimistic seer who travels about with Spark, his feline comic relief, and assorted companions. Originally a lighter strip based on puns and wordplay, Cerebus Syndrome ensued, arguably starting with the "Visions of Doom" arc, but certainly by "Storm of Souls".

On May 24, 2013, the comic ended at 3,000 comics. A set of colored epilogue prints, some with art by Garth Graham, were later published. A half-hour documentary about the making of the comic, See For Yourself: The Dominic Deegan Story, was released by TriFocal Productions.

open/close all folders
Tropes A-C
Tropes D-G
Tropes H-M
Advertisement:
Tropes N-R
Quilt: I have deduced that your old girlfriend escaped death because she was pregnant with your love-child and this Oracle Hunter is none other than your long-lost daughter!
Donovan Deegan: And how, praytell, did you deduce all that?
Quilt: Because it is very dramatic.
Tropes S-Z