Shut Up and Save Me! 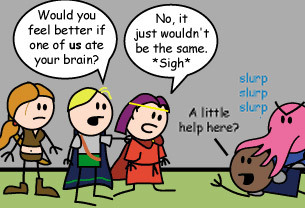 Pinkie Pie: Wheeee! [giggles] I knew we'd do it!
Daring Do: Thanks for reminding me to never give up hope, Pinkie.
Rainbow Dash: And I'm kinda "hoping" you ponies will untie me before we all take a bath in bubbling green slime!
— My Little Pony: Friendship Is Magic, "Daring Done?"

Instead of providing rescue to another character, this one is distracted by something. The rescue is Played for Comedy; subverting the Big Damn Heroes by having heroes not awesome during the rescue. They may seem completely oblivious to the danger their friend/ally is in, allowing for a completely different sort of rescue to occur.

This can also be the Inverted Trope of two other rescue tropes; Refuse to Rescue the Disliked (which involves the hero deliberately choosing not to rescue on the basis of personal dislike) and Unwanted Rescue (which involves the character being rescued trying to ignore or prevent the hero's attempts).

For the opposite (where a character would prefer another character stop trying to "save" them), see Unwanted Assistance.