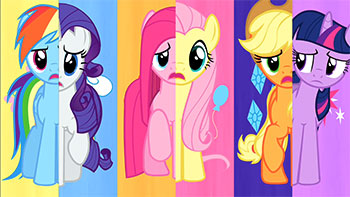 Twilight Sparkle wakes up one bright and sunny morning, cheerily singing about how fine everything in Ponyville is...until a deluge of water dumps on her head. She thinks it's Rainbow Dash playing a mean prank, but the reality is far worse: it's Rarity trying and failing to control the weather with her magic—and she has Rainbow Dash's cutie mark!

A quick trip (and a musical number) around Ponyville shows that the rest of Twilight's friends have also switched cutie marks and jobs: Rainbow Dash (switched with Fluttershy) is trying in vain to rein in a cottage full of unruly critters; Fluttershy (switched with Pinkie Pie) is hosting a borefest of a party at Sugarcube Corner; Pinkie (switched with Applejack) is literally running Sweet Apple Acres into the ground with her inept farmwork; and Applejack (switched with Rarity) is failing to generate any business at Carousel Boutique with her tacky dresses. The strangest part? All of Twilight's friends think that their lives have always been this way, and are resigned to doing what their new marks are telling them. Needless to say, they're feeling pretty down—and the rest of Ponyville is being dragged down with them.

Returning home, Twilight realizes what has happened to her friends. The other night, she received a letter from Princess Celestia along with a journal containing Star Swirl the Bearded's secret, unfinished spell, which Celestia believes Twilight is capable of understanding and rewriting:

From one to another, another to one. A mark of one's destiny singled out alone, fulfilled.

Twilight cast the spell to test it and didn't notice that it caused her Element of Magic to jumble up the other Elements of Harmony, and with them, the cutie marks and destinies of her friends. Because Star Swirl gave up on the spell before he could get it right, there is no counter-spell to fix her mistake!

Soon Twilight gets an idea: though she may not be able to remind her friends of who they are, she can show them what they mean to each other. She starts by getting Fluttershy to help Rainbow Dash deal with her unruly animals. As Fluttershy calms the critters down and rediscovers her ability to communicate with animals, Twilight slaps the pegasus' Element around her neck. Its magic reminds her of her destiny and returns her cutie mark to normal. One by one, Twilight guides her friends to where their destinies truly lie so they can help each other through their troubles. Each time she uses the Elements until all five regain their true selves and everyone in Ponyville is happy again. Twilight remembers Star Swirl's spell and, inspired by her experiences, revises the incantation:

Advertisement:
From all of us together, together we are friends. With the marks of our destinies made one, there is magic without end.

As soon as Twilight finishes writing the spell, the magic of all her friends' Elements suddenly funnels into her, and she vanishes from the library in a brilliant flash. Twilight finds herself in a vast expanse of space but she's not alone: Princess Celestia is also there, and she proudly tells Twilight that, by accomplishing what even Star Swirl could not do, she is ready to fulfill her own destiny. In another brilliant flash, Twilight reappears before her friends in Ponyville with...wings?!

Celestia tells Twilight that, ever since she came to Ponyville, she has displayed the charity, compassion, devotion, integrity, optimism, and leadership of a true princess. Now it is her turn to guide Equestria through the magic of friendship, just as Celestia has done for her. A grand coronation ceremony is held for the newly-minted Princess Twilight Sparkle, where she thanks all her friends for what they've taught her. However, everypony is assured that this does not mean the end of Twilight's lessons in friendship or her adventures with her friends—in Twilight's words as she takes off into the sky with her new wings, everything is going to be just fine.

*cue...even HAPPIER credits music than before!!!*

Example of:
Awesome Moment of Crowning