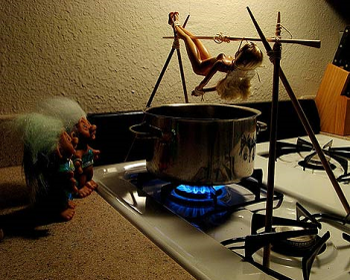 One specific, discredited version of I'm a Humanitarian is the idea that when people from the "civilized world" (like missionaries and explorers) encounter Hollywood Natives, they are in danger of being eaten. The "civilized" characters may initially think that the natives are treating them as respected guests or even gods, and feeding them better than they ever have been... but then, without fail, out come the pots and the chanting.

Cast-iron cauldrons are a staple of the trope, even though the natives appear to be otherwise stuck in the stone age — talk about Anachronism Stew!

Jungle Drums, Skeletons in the Coat Closet and a Tribal Carry may well be involved. If they escape, they can expect to be Chased by Angry Natives.

Sometimes, the eating aspect isn't as stressed, but the idea remains that the outsider will be attacked and sacrificed instantly upon entering foreign territory; a particular Sister Trope is Appease the Volcano God.

While cannibalism for ritualistic or cult reasons has indeed been practiced by Real Life tribes, most accounts of the type seen in fiction were likely apocryphal, spread by white men as an excuse for the use of military force as a means of "civilizing" and "pacifying" the "savages". More info is given on The Other Wiki here.