No Time to Explain 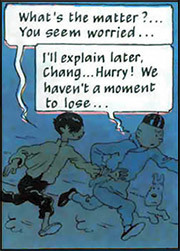 Mindy: What the hell is going on?!
Woody: No time to explain! You were possessed by an alien probe, and now we're being chased by four soldiers who also appear to have been possessed in the same way! [Beat] I guess there was time to explain.
— Lazer Team
Advertisement:

This line is often used when the speaker in question has to take immediate action on something and can't explain it immediately.

The real reason it's used is to get the listener to change locations without explanation, as to effect an on-screen reveal. Or because the writer wants to keep a character's motivations secret from the reader (or hasn't thought them up yet) and can't have the character explain himself right now. Or because there'd be no conflict if a character actually bothered to explain something instead of leaving the other characters confused.

The phrase "I'll explain on the way there" can also be used, leading to a "Let Me Get This Straight..." moment in the new location where everything's summed up.

The only real justification is that it almost always takes longer to describe a given action than to just perform it — in the words of Grace Hopper, "It's easier to ask forgiveness than it is to get permission." Explaining the action may waste valuable time that should be spent performing the action — meaning there is no time to perform the action at all. Of course, there's always the possibility that the person asking forgiveness really should have gotten permission — Nice Job Breaking It, Hero

Use of this trope can stretch credibility when the situation really can be summed up in only a few words. If you need somebody to run away, "No time to explain!" really saves you no time versus "There's a bomb!"

So why do writers use it? There are times when it is useful. If you know the characters in your TV series are going to be at point A when they learn where the bomb is, and you know the characters will have to be at the bomb at point B — but to add scenes of them traveling from place to place is expensive and adds shooting days to the production. You could have them explain it all at point A, but that scene's been long already. There's very little dialogue at point B, so discussing it at point B would give the characters not actively defusing the bomb something to do. Here, it's okay to make an Acceptable Break from Reality just to get the characters from one place to another without breaking up the pacing of the work.

See also You Didn't Ask, Never Give the Captain a Straight Answer, Unspoken Plan Guarantee, and Don't Ask, Just Run. Contrast Talking Is a Free Action. However, be careful: This is a favorite tactic of a High-School Hustler in initiating a Bavarian Fire Drill. Can also be used to cover an Indy Ploy and make it seem as though there is a plan.

Not to be confused with the video game with the same name, though this trope is common there.

Ron: I hate it when she does that. Would it kill her to tell us what she's up to for once?