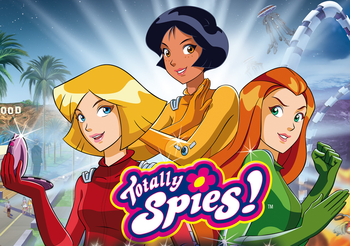 Left to right: Clover, Alex and Sam. Totally spies, despite not wearing very stealthy attire.
Clover: Finally, an evil villain who isn't bitter about being dissed or something.
Jerry: It says here that the Lady Dragon left the video game industry several years ago because they refused to make some of her more eccentric games.
Clover: Figures.
— "Game Girls"
Advertisement:

Totally Spies! (2001-2008, 2013-2015) is an animated show produced by French company Marathon Media. Three action girls—Alex, Clover and Sam—are (totally) spies and also regular high school (later college) students working for the World Organization of Human Protection (more commonly called "WOOHP" for short), an ultra-top secret spy agency that fights global crime. In each episode, the girls battle the plans of some variety of supervillain with an axe to grind while also dealing with their personal lives, including their collective rival, Mandy (who's their classmate in both high school and college). Like Kim Possible, Totally Spies! mines both spy and teen clichés.

The show is notable for being one of the first Western-made animated series to employ selected Japanese Visual Arts Tropes, such as Cross-Popping Veins and the Sweat Drop, under the assumption viewers were already familiar with them, as opposed to employing them to evoke the anime style like Teen Titans. In fact, the shows' creators have mentioned that The Dirty Pair, which was massively popular in France in their youth, was a big influence on the show.

The show totally received a movie, as well as a Spin-Off (The Amazing Spiez!). It began airing on Universal Kids on June 24, and full episodes and the movie can be watched on the show's official YouTube channel.

In January 2022, six years after the last season, Thomas Astruc, one of the original writers for the series, announced

the show would be returning again with a new season in the works. A new writing staff is taking over for this one.