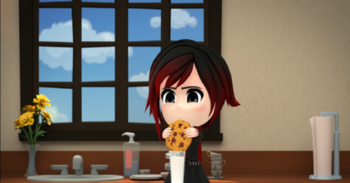 The struggle has never been so real.
Phoebe: This reminds me of the time when I was living on the street and this guy offered to buy me food if I slept with him.
Rachel: How is this like that?
Phoebe: Well, let's see, it's not really like that. Because, you see, that was an actual problem, and uh, yours is just like, y'know, a bunch of, y'know, high school crap that nobody really gives, y'know...
— Friends
Advertisement:

Some problems are universal and basic: death, torture, disease, hunger, pain, madness, etc. These are part of the human condition and could happen to anybody.

This trope is about other problems. Minor problems. Problems of the prosperous and comfortable — problems that are only significant if you've already got the basics of food, clothing, shelter, and sanity down. It's not that you can't get food — they took your favorite sandwich off the menu down at the golf club, the best Philly cheese-steak in town, and that's terrible. Or maybe your mobile phone service is cheating you on its internet plan — which costs you more money than it should, yes, but thirty years ago there was no such thing as mobile telephone service and twenty years there was no civilian internetwork. Or your $600USD mobile telephone is broken — again, not great, but when you can buy a perfectly good one for $20USD...

Note that some serious problems don't rise to the food, clothing, and shelter level. Racist hatred, spousal abuse, misogyny, and school bullying aren't always life-threatening, and may indeed cause no physical injury at all. Still, these problems should probably not be considered First World Problems — even when they happen to a bonafide rich (or otherwise comfortable) First Worlder.

Mind you, there is a place for First World Problems in fictionnote  'First World' no longer refers to the NATO alliance and countries aligned with it, now that the Cold War is over, and is a short-hand term for the world's most economically developed countries instead. Likewise the term 'Third World' no longer refers to countries in the Non-Aligned Movement or otherwise unaligned with NATO or the Warsaw Pact, and refers to the world's less economically developed countries. . There has to be, as the First World enjoys consuming media that is relevant to them and their interests. Even people who are still struggling with more fundamental problems can, if they have time and access, get some enjoyment out of characters dealing with them—sometimes schadenfreude, sometimes for escapism. Clever writers can make something that looks like a First World Problem tie directly into something more fundamental.

Keep in mind that a key aspect of the Third World is not merely how the majority are impoverished: it's how vast numbers of the the impoverished live in proximity to a small number with outrageous wealth (think Mobutu Sese Seko

for example). While in the US and the like, usually the differences aren't so extreme, whatever your politics it's likely you can at least imagine a few gated communities buffeted by a ghetto or a trailer park, and class conflict is a common theme in all fiction.

The Trope Namer is a Twitter hashtag. Twitter is an excellent platform for short moanings about daily life and our miserable existences by people who are generally well-enough off for this sort of problem, so this was a match made in heaven. The hashtag is still going strong. The trope itself is older than this, though: an older memetic quote on the same lines is parents responding to children refusing to eat vegetables with, "There are children starving in Africa!" (or "China" in The '30s).

Examples shall be limited to works that notably concern themselves with Third World themes. If we had to list all the episodes of television shows where the main conflict isn't starvation, we'd be here all day.

Becomes the nastiest type of Misery Poker when used to claim not that a trivial problem only seems serious to someone whose life is basically pretty good — but that any problem suffered by a "First Worlder" is by definition trivial.