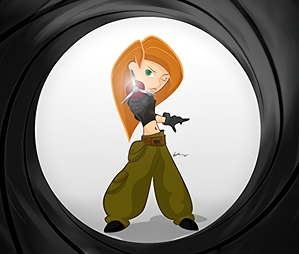 Possible. Kim Possible.note And she is going to shoot you.
"He's not a child! He's a lethal weapon!"
— Army major, Stormbreaker
Advertisement:

A hero with all of the style, panache and gadgetry of James Bond, the Teen Superspy exists to save the world (or maybe just the kids) from megalomaniacs bent on world domination. And he'll do it all without being old enough to have a martini. Or drive. And he'll still have to find time to do his homework.

The Teen Superspy is the implausibly young agent of secret agency. Perhaps she's been trained from birth for this role. Perhaps she's carrying the legacy of a missing or dead parent. Perhaps the government figures no one will suspect children of being secret agents. Perhaps they were just in the wrong place at the right time. Whatever the case, expect them to have an arsenal of high-tech spy gadgets disguised as typical teen paraphernalia.

Compare Wake Up, Go to School, Save the World. Remove all the wish fulfillment and whimsy from this trope, and you'd end up with something closer to Child Soldier.