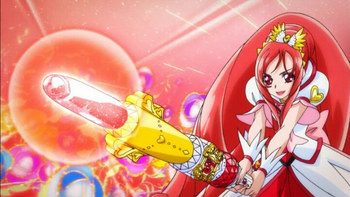 Who knew makeup was such a good tool to defeat villains?
Advertisement:

Female spies and similar characters sometimes use gadgets, tools, or weapons that either are or resemble makeup. Lipstick is the most common and often, but not always, fires some kind of laser. Other beauty products like compact mirrors, eye shadow, and perfume also commonly double as weapons. In addition to lasers, it's not unheard of for such weapons to discharge gas or smoke.

Since cosmetics are largely still seen as feminine, weaponized makeup is an easy way to mark a character as a Girly Bruiser. If she's a Tomboy, using weaponized cosmetics could mean she's a Tomboy with a Girly Streak. Finally, if the character is male, it may signify he's In Touch with His Feminine Side.

Sub-Trope of Shoe Phone and similar to Drugged Lipstick. Compare with other "hidden in plain sight" feminine weapons like the Combat Haircomb, Combat Hand Fan, or Parasol of Pain. If they're just ordinary cosmetics used in their Real Life form, you have another Improvised Weapon.