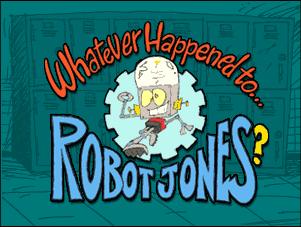 Whatever Happened to... Robot Jones? is an animated series created by Cow and Chicken storyboard artist Greg Miller which pays affectionate homage to the middle-American culture of late 1970s and early 1980s.

Set in an alternate history where robots have become a major part of society, the world's most technologically advanced robot, named "Robot Jones," is given the task to attend a human junior high school to understand humanity. Along the way he befriends a trio of boys named Socks, Mitch, and Cubey, and develops a crush on a nerd named Shannon, whose Braces of Orthodontic Overkill and prosthetic leg make her look robotic. However, lurking in a secret base in the school air ducts, there are the Yogman Twins, two evil brothers that wish to steal Robot's brain and use it to control the minds of everyone in the school.

The show was one of the finalists in the the "Voice Your Choice" event in 2000 where viewers voted on their favorite pilots for new shows. It lost out to The Grim Adventures of Billy & Mandy (under its original name Grim and Evil, back when it aired along its eventual spinoff Evil Con Carne) and while it did eventually go to series, the network gave it very little support or promotion. ...Robot Jones became the very last of Cartoon Network's Cartoon Cartoonsnote Not counting when Evil Con Carne was eventually spun off into its own series. and, along with the network's other shows that debuted at the beginning of the decade, ended up being one of its briefest, airing from 2002-2003 with 26 episodes made but only 13 aired in America.

Of note, this was the final western animated show to be animated with traditional cels (Ed, Edd n Eddy lasted longer, but transitioned to digital ink and paint halfway through its run).

Whatever Happened to... Robot Jones? provides examples of:

Why you should "change your oil" before leaving the house.

Why you should "change your oil" before leaving the house.