Your Mime Makes It Real 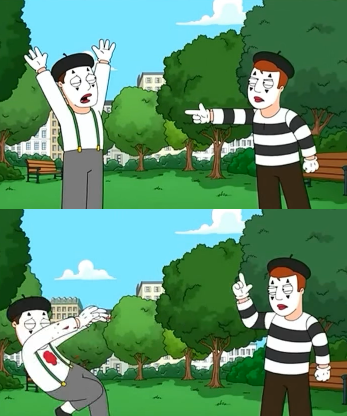 Silent but deadly.
"Who needs a gun, when you've got imagination!"
— Tucker, Danger 5
Advertisement:

Primarily a Comedy Trope, Your Mime Makes It Real is when a character mimes an action and this mime causes a real world effect to occur. For example, miming aiming a gun at someone and pulling the trigger causes an object to go flying out of their hands. Or miming peeling a banana and dropping the Banana Peel on the ground will cause someone to slip over.

A standard method for dealing with this is to mime a situation the attacking mime must deal with, such as miming locking a door or sealing them in a glass box.

A standard tactic of the Enemy Mime. And a variant on (as well as a terrible pun on) Your Mind Makes It Real. Compare Full-Contact Magic.

The Mime has the ability to conjure invisible objects just by pantomiming them, allowing him to create virtually anything.

The Mime has the ability to conjure invisible objects just by pantomiming them, allowing him to create virtually anything.