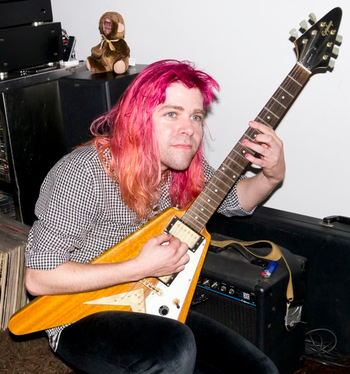 Ariel Pink (born Ariel Rosenberg) is a cult American musician, who came to notoriety in the 2000s for pioneering an idiosyncratic, Retraux musical style that blended lo-fi recording with elements of 70s' and 80s'-style pop-rock, new wave, psychedelia and an often zany, tongue-in-cheek sense of humour.

Pink began self-releasing his music under the Haunted Graffiti moniker around 1998, which were mostly distributed as CD-Rs to close friends. A turning point of sorts in Pink's career came in 2004 when one of his homemade albums ended up in the hands of Animal Collective, who signed him up to their Paw Tracks label. From here, Pink's distinctive sound started to attract a following in indie circles and began to spawn many imitators, whilst likeminded musicians such as John Maus and R. Stevie Moore (both of whom close collaborators with Pink) also started receiving attention, eventually leading to the birth of a scene dubbed by critics as 'hypnagogic pop'.