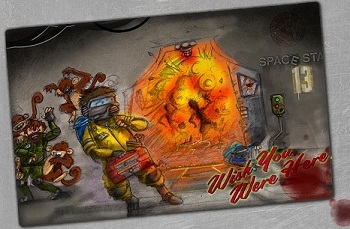 Just another day on the station.
"It's like playing an episode of Sealab 2021 on acid."
—Angry Diplomat, on the Something Awful version
Advertisement:

One of the most pervasive and popular Role Playing Games on the BYOND platform, Space Station 13 is all about living and working on a Space Station and trying not to die horribly.

You are one of many people aboard Space Station 13: one of many Spacestations owned by the Nanotrasen corporation and kept in line by the rather vaguely defined Central Command (frequently Wikiworded as Centcom) unit. Various problems occur on or around the station, which are vaguely hinted at by unreliable and classified communications. The incompetent, paranoid, self-serving, and just plain sociopathic members of Space Station 13 then have to attempt to do their jobs and survive as the situation unfolds around them - but they usually just start killing each other until they evacuate. The modes differ greatly between servers, but the usual premise is that there are antagonists on the station, whether it's traitors from the Syndicate, a wizard, or even the cult of Nar'sie.

Every player is assigned a certain job, according to preferences, random chance, and what they haven't been banned from. There are several departments of sorts, including the science team, medical, engineering, security, supply depot, botanics, and various others. They each have their own spawning sections, equipment, access levels and duties, all designed to keep the station going and deal with whatever issues come up.

In practice, of course, it never works out that way. Every job is dazzlingly complex, with even the most mundane of duties often having a shocking amount of depth. This, combined with the accurate physics simulations, hundreds of different items, and a robust amount of unique things to see and do, means the average player could play for years and never get bored.

SS13 has a messy development history, with numerous code bases and branches, and gameplay (and even setting) between different servers can be vastly different. The earliest iterations of the game trace all the way back to 2003, and is almost unrecognizable from what the game is today.

Many attempts have been made to remake SS13 on a better platform (BYOND is an extremely old engine that doesn't run very well), but so far, none have succeeded.

Welcome to the station, crew. Please enjoy your stay.

open/close all folders
All Versions
Goonstation

Goonstation is the most notable one, being the first opensource server for ss13. Today, it is closedsourced, and has a bunch more features than the other codebases. Goonstation was one of the most chaotic of the servers (featuring poop as a key item). Since then, game changes have made it much quicker, sleeker and saner to the point where it is probably one of the most accessible stations for newer players (and all the poop is gone).

TG station is a codebase split off the original r4407 code. Unlike Goon, it is open-source, which makes it the base of most servers nowadays. It, and most of the servers based of it, is (debatably) more roleplaying-oriented then goon.