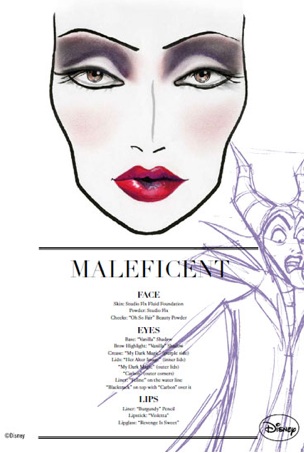 …yet it's still pretty fashionable

. note Especially on Angelina Jolie.
"Why should false painting imitate his cheek,
And steal dead seeming of his living hue?
Why should poor beauty indirectly seek
Roses of shadow, since his rose is true?"
— William Shakespeare, "Sonnet 67"
Advertisement:

A Forgotten Trope nowadays, but one that lasted for many centuries in western Europe: wearing any form of "paint" on your face is a sign of evil, particularly dishonesty, more to be expected of the Decadent Court or Vice City than any more wholesome place. Only an actress or some such disreputable woman would self-paint, which is why "painted woman" is not a compliment. The Femme Fatale and The Vamp obviously use make-up, as part of their stock in trade is unnaturally good looks. (The trope is rarer but stronger for men.)

Historically, many forms of make-up have been hazardous — such as lead-based or arsenic-based ones — so a woman who used them might sacrifice her health or even life, not to mention her looks in the long term, for a brief attractive appearance. At the very least, this was a sign that she was vain and foolish.

The trope faded out as make-up became acceptable, with points at which heavy make-up rather than make-up, in general, was the mark, and the degree of evil entailed varies widely. The transition towards non-toxic materials also helped in this. Fastidiously-applied makeup might indicate a character is rigorous and strict, usually a trait found on villains or Wicked Cultured; a male character wearing makeup suggests a character who ignores normal gender roles, with a whole host of Sissy Villain and Otherworldly and Sexually Ambiguous readings that have stuck around even as attitudes towards gender have relaxed.

When the trope appears nowadays, it's usually applied to garish makeup. From the very beginning, Punk Rock and Heavy Metal have demonstrated that a painted — and usually male — face is a sure sign that a character is mean or crazy, or at least sinister.

May overlap with Beauty Equals Goodness and Evil Makes You Ugly: only evil people would need to paint since good ones are naturally beautiful.

This often involved very heavy make-up in visual media, to make it clear that the character wears it, the alternatives being showing it being put on, having it run from tears or rain, or becoming lipstick kisses.

Due to the strong historical and cultural associations of cosmetics with femininity, a man who wears obvious makeup in present-day society (outside of certain specific contexts, such as stage acting or the circus) will often be taken for a Crossdresser, or at least be considered effeminate. This trope is thus (predictably) a staple of the Creepy Crossdresser archetype. By contrast, it is inverted by the Drag Queen, who entertains by cleverly subverting gender norms, and shows crossdressing and makeup as positive and fun things.

In real life, the trope is especially hard on Transgender people, who often need heavy makeup to be able to appear presentable as their preferred gender.