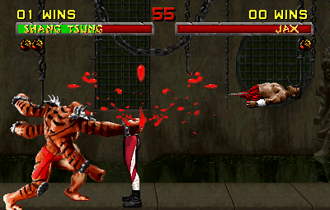 Well, he's not getting up after that.note And no, the life bar to the left isn't wrong, this is Shang Tsung's secret Fatality in this game.
FINISH HIM!
Advertisement:

The Finishing Move is a special combat maneuver that is only ever used to cap off a battle, especially one that's already been won. It's often incredibly flashy, frequently requiring a "charge-up" time long enough that it would be impractical to use if your opponent weren't already on the ground in a bloody heap. Even without a "charge-up" time, using a Finishing Move at the beginning of a fight is often unwise (especially if It Only Works Once), because if the enemy can counter it, they most likely will.

When a new Finishing Move is introduced in a story, it's often treated as a case of Forbidden Chekhov's Gun — if the move isn't carried out perfectly, it could backfire and kill our hero(es), or even cause The End of the World as We Know It. Inevitably, the move turns out to be the only thing that can save them this week, and so it works perfectly, and it's treated as being reliable from then on.

Limit Breaks in video games are usually intended as Finishing Moves, but often have different uses. Finishing Moves are also common as a natural part of gameplay in games, as opposed to being intended to be used at the end of the fight and it's just cool. A Finishing Move which makes it easier to kill other enemies in a fight after killing one enemy with it is a Chain Lethality Enabler.

A Coup de Grâce may be used as one, as might Finishing Stomp and Kick Them While They Are Down. See also Coup de Grâce Cutscene. If the effect tends to be delayed then it is You Are Already Dead. If the move is countered, No Selled or otherwise fails to finish off an enemy, especially if it's to show off how badass the newest villain is, then you've got a case of The Worf Barrage.

Example of:
This Is a Drill