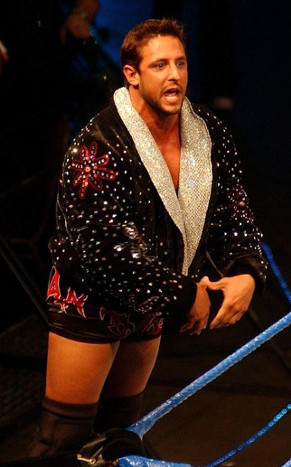 Peter Alan Gruner Jr. (born May 11, 1974) is a retired American Professional Wrestler from Allentown, PA best known for his work in WCW and WWE as Billy Kidman or Kidman. He debuted in 1994 and first competed under the name Kid Flash. He formed a tag team with Ace Darling called the Shooting Stars, and they competed in various promotions, winning the ECWA (Delaware) Tag Team Titles

. He debuted in WCW in 1996 and spent his first year as a Jobber. He got his first storyline when he climbed the guardrail and joined Raven's Flock on the October 13, 1997 WCW Monday Nitro. He turned face during the Raven-Perry Saturn match at WCW Fall Brawl 98, September 13, 1998, and, the following night on Nitro, defeated Juventud Guerrera to win his first WCW World Cruiserweight Title

. He would hold the title 2 more times in WCW, along with holding the WCW World Tag Team Titles

twice, 1x w/Rey Mysterio Jr. and 1x w/Konnan, and he and Rey would defeat Elix Skipper and Kid Romeo to be the second, and final, WCW World Cruiserweight Tag Team Champions

. When WWE bought WCW, Kidman was brought in as part of the InVasion/Alliance angle. During his WWE run, he would have four more reigns as Cruiserweight Champion and one run with the WWE SmackDown! Tag Team Title

with Paul London. WWE released him in 2005 and he toured the independents before returning in 2010 to work as a trainer. He was inducted into the ECWA Hall of Fame in 2004.