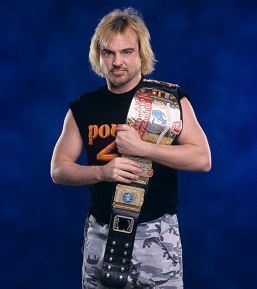 "How does he do that?"
—Joey Styles, after Spike Dudley squashed and pinned Rhino after Rhino had defeated Christopher Daniels, ECW Hostile City Showdown, June 26, 1999.
Advertisement:

Matthew Jonathan Hyson (born August 13, 1970) is a semi-retired American Professional Wrestler and trainer from Providence, RI best known for his work in ECW from 1996-2001 and in WWE from 2001-2005 as Spike Dudley. He debuted in 1994 after training at the APW Boot Camp in Hayward, California and spent the next three years on the California independent circuit. He debuted as Spike in 1996 as the "runt" of Dudley litter. Over his time, he would hold the ECW World Tag Team Titles

twice with Balls Mahoney and feud with his "brothers," Buh Buh Ray, D-Von and Big Dick. He debuted in WWE in 2001 after ECW shut down and would alternate between teaming with and feuding with Bubba Ray and D-Von. Over his WWE run, he held the WWE European Heavyweight Title once, the WWE World Cruiserweight Title

once, the WWE Hardcore Title

once with Tazz. He later followed Ray and Devon to TNA as Brother Runt. He would go on to compete for a variety of independents before "retiring" in 2010.