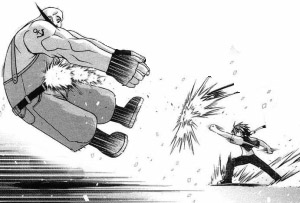 "The strength of the flesh is as nothing. Shall I... demonstrate?"
— Inner-Moka Akashiya, Rosario + Vampire
Advertisement:

In Real Life, a person's physique, if not their physical size, is generally a dependable indicator of their physical strength. Muscle strength (force applied in Newtons) is proportional to the 'physiological cross-sectional area' (PCSA) or the total number of fascicles of the muscle.note Per cross sectional unit area, healthy human muscle produces the same amount of force with little deviation, regardless of whether or not the muscle has been trained and factors such as age and sex. All things being equal, more muscle translates to more strength.

In fiction, all bets are off. Muscles? Who needs 'em?

The Pintsized Powerhouse is able to physically outperform heavily-muscled guys ten times his size and is more than capable of sending them flying with a single punch, physics be damned. A thin, wiry character may have no difficulty lifting or punching way above their weight class. This is generally done to show just how badass they really are. Usually lampshaded by Super Strength, and often more dubiously by a Charles Atlas Superpower. Alternatively, The Big Guy may not be very strong at all, but usually his strength is simply dwarfed in comparison. The Big Guy being physically dominated is usually a Giant Mook or similarly unimportant character. Generally, when it comes to important Big Guys, Muscles Are Meaningful.

Weaker characters beating the stronger characters is often a demonstration of the fact that skill and other factors can trump strength in a fight, which is Truth in Television to a certain degree, but their methods have nothing to do with this trope.

There are several related tropes:

Note that this trope is specifically about instances in which the person with the seemingly weaker body possesses more actual strength than a heavily muscled opponent. This does not include characters who only win because of other characteristics that make them superior to their enemies, like speed or weapon proficiency. It's a common occurrence in Fighting Games that a speedy character is considered superior to the Mighty Glacier due to their speed and ability to perform Combos, but they only fit here if they are not only faster, but their attacks actually pack more of a punch as well.

Contrast Stout Strength, where the character has the muscle, he just has fat on top of it as well, and Muscles Are Meaningful, where the muscles DO make a difference. When it appears on comic book heroes, it is always a case of Heroic Build. Compare and contrast Clark Kent Outfit, when a character looks meek... until he takes his shirt off, and it's revealed that he has abs of steel.

See also: Bishōnen Line, Cute Bruiser, Little Miss Badass, Boobs of Steel, and Amazonian Beauty for specific character design examples. May overlap with The Gift, Hard Work Hardly Works, and Waif-Fu. See Monstrosity Equals Weakness for when this, and the other side of it, is the case across the board.