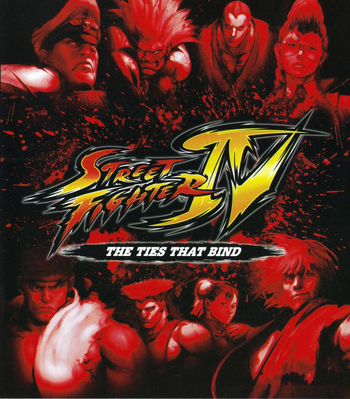 Street Fighter IV: The Ties That Bind is a 2009 animated film directed by Jiro Kanai. This is featured on a bonus disc included in the Collector's Edition of Street Fighter IV for the PlayStation 3, Xbox 360 and PC. This anime is considered to be a tie-in to the game.

Over the past year, famous martial artists who are the top practitioners of their respective martial art have been disappearing. On one hand, there is Cammy of Delta Red suspecting that Shadaloo is up to no good, despite her fellow agents believing that the organization is history. On the other hand, there is Guile teamed with Chun-Li of Interpol investigating the disappearances.

Meanwhile, there is Seth, leader of S.I.N., who is quite interested in Ryu and his Satsui No Hado (殺意の波動, translated as "Surge of Murderous Intent"). Seth is trying to power up a weapon called BLECE, and Ryu's Satsui No Hado is just the thing he needs to power it up. Worse, Ryu's best friend Ken and his wife Eliza also get involved in the whole deal, alongside his #1 fangirl Sakura Kasugano...