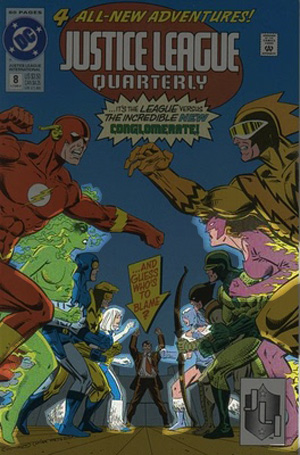 Maybe it's because the others Wouldn't Hit a Girl?
"Hey, can someone explain to me why I'm always fighting skanky chicks who fly? I mean, Sabine, Samantha, Tsukiko... I bet even the druid's hawk was some sort of a bird-hussy. I should take a level of ranger so I can choose Favored Enemy (Airborne Tramp)."
— Haley Starshine, The Order of the Stick #518

An unspoken version of Wouldn't Hit a Girl; when there's a team with one Action Girl, and there's one female opponent among several men, the two will always take care of each other. She might take out one of the guys, too, but the men will keep to themselves so long as that option is there. It's not universal enough to list aversions, but it's definitely noticeable.

Essentially, when the Hero needs to fight a girl, another female character must take his spot - sometimes the Hero's girlfriend. Often the job of The Chick in the Five-Man Band is to smack the supervillainess around, essentially becoming the team's Designated Hitter for all female villains.

If one girl is the morality-reversed equivalent of the other (for example, The Chick and Dark Chick, or the Action Girl and Dark Action Girl), the odds increase exponentially.

This tends to be the end result of a basically gendered aspect of many superheroes: male superheroes tend to have a generally male Rogues Gallery, while superheroines tend to have female villains. Thus, a Legion of Doom team-up tends to be fought along gender lines. Also, because female characters are rarely The Leader in a team ensemble, her fight against her evil female counterpart is often secondary, while the "real" fight is decided between men.

Of course, in the end, this is really about audience expectations. There is a deep-seated cultural aversion to depicting a man (supposedly the hero) laying the physical smackdown on a woman, even if she's clearly evil and dangerous. It's much easier to just sidestep the issue completely and avoid depicting it.

This is also the reason why there is much less of a problem with a female hero fighting a male villain; he's supposed to be evil, so there is no contradiction with him attacking a woman.

There are a few standard exceptions to the trope, even in works that use it; a Gonk usually doesn't count as female even if they are (and is thus a valid target for a male hero), and a Non-Human Sidekick or Funny Animal companion usually doesn't count as male, regardless of actual gender (and can thus attack female villains with impunity). Of course, a villainess could always change into a monstrous form to bypass the trope entirely.

It might lead to a Cat Fight, but more often the fight is otherwise played seriously. Compare Counterpart Combat Coordination.

Girls Do Get It Done

Stromfront appears to be dominating the between between her and Kimiko and Starlight... until Queen Maeve suddenly shows up turns the battle's favors over, much to Frenchie's amusement.

Girls Do Get It Done

Stromfront appears to be dominating the between between her and Kimiko and Starlight... until Queen Maeve suddenly shows up turns the battle's favors over, much to Frenchie's amusement.