All spoilers prior to the end of Avengers: Endgame are left unmarked. You Have Been Warned! 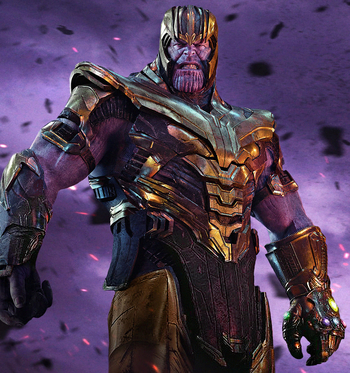 "You could not live with your own failure. Where did that bring you? Back to me."
Click here to see him in Infinity War 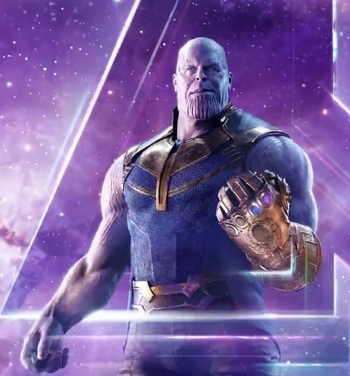 "I know what it's like to lose. To feel so desperately that you're right, yet to fail nonetheless. It's frightening, turns the legs to jelly. But I ask you, to what end? Dread it, run from it... destiny arrives all the same. And now it's here. Or should I say, I am."
Advertisement:

A Galactic Conqueror that rules over the Chitauri and several other races, and the Big Bad of the Infinity Saga. He lent Loki his forces in exchange for Loki promising him the Tesseract in The Avengers, and later promises Ronan the Accuser that he will destroy the homeworld of the Nova Corps in exchange for the Orb in Guardians of the Galaxy.

Born disfigured on the planet Titan, Thanos became obsessed with the idea of proving himself to a population that hated and feared him. After he learned that his homeworld was on the cusp of an Overpopulation Crisis, he proposed a radical solution: cull half of the planet's population indiscriminately so that the other half would face no scarcity of resources. This solution earned him the moniker of "Mad Titan", and he was exiled from his home. As Thanos had feared, Titan's population starved to death or were killed in the civil war that engulfed the planet.

Vowing to prevent this tragedy from ever happening again, he traveled across countless planets that he deemed to be overpopulated, assembling his massive armies and killing untold billions in what he considered an act of mercy. Upon learning about the Infinity Stones, six Power Crystal representations of the Powers That Be that served as Plot Devices in multiple MCU films, Thanos decided to apply his vision to the entire universe at once. His ultimate goal then became to use the godlike powers the Infinity Stones will grant him to "balance the universe", saving half of sentient life from the same eventual tragedy that destroyed his people by wiping out the other. 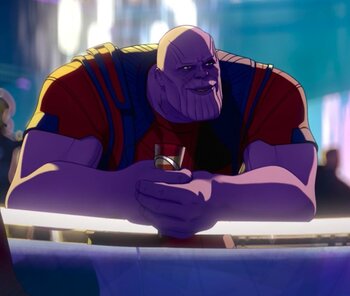 "T'Challa here showed me there was more than one way to reallocate the universe's resources."

"I'm a big enough man to admit when I'm wrong."

On Earth-21818, T'Challa was able to convince Thanos to change his ways and join his crew of Ravagers to help those across the galaxy. 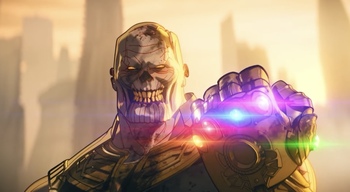 On Earth-89521, Thanos comes to Earth to acquire the Infinity Stones just like in the Sacred Timeline, only to quickly become infected by the zombie horde. 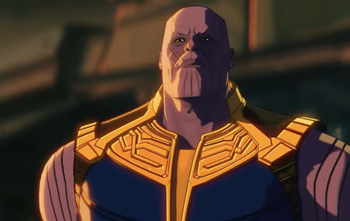 On Earth-29929, where Ultron defeated the Avengers in Avengers: Age of Ultron, Thanos still arrives on Earth only to be quickly outmatched by the rogue artificial intelligence. 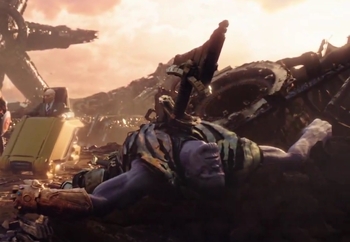 Appearances: Doctor Strange in the Multiverse of Madness note As a memory construct

On Earth-838, a variant of Thanos would wage war on the heroes of the universe in his quest for the Infinity Stones like his Sacred Timeline counterpart. He was eventually defeated by the combined might of the Illuminati.

"I am... inevitable."
Feedback