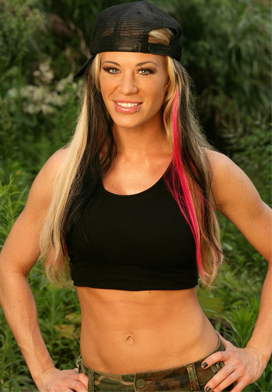 Ashley Marie Massaro (May 26, 1979 – May 16, 2019) was an American professional wrestler, actress and model best known for her time in WWE as Ashley from 2005-2008 after winning the 2005 WWE Diva Search. Starting off as a punching bag of Vince's Devils (Candice Michelle, Torrie Wilson, and Victoria), she eventually became a valet for Paul London and Brian Kendrick before transitioning into a full-time competitor until retiring in mid-2008 to tend to her sick daughter.

Massaro was never trained properly by WWE before getting into the ring, which led to her botching a lot, becoming injury prone and her being considered one of WWE's worst in-ring performers. Regardless, she still had a lot of fans due to her sex appeal, and has posed for Playboy multiple times. She was also a contestant on Survivor: China in 2007—for tropes related to that, see here.

After a decade away from wrestling, she was planning on a return to the ring, but unfortunately took her own life ten days before her 40th birthday.