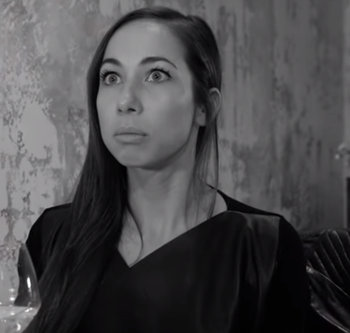 Something terrible has just happened
Advertisement:

Tess Masazza is a French journalist, YouTuber, screenwriter, actress and speaker, living and working in Italy.

Her first videos were uploaded in 2014 and parodied the stereotypical antics of the Italian equivalent of the American Valley Girl. They quickly gained more than one million views each and evolved into a Webseries, Insopportabilmente Donna note  literally “A woman, unbearably…”., which deals with the daily problems of young women living and trying to build a career (and find love) in a big town of the Italian North.

She has also made

She has since become a familiar presence in Italian Radio and Television and in 2017 has gotten her first part in a movie. In 2019 her webseries was adapted into a theatrical play.

, but more of her videos can also be found here

. Note that all videos are in Italian with no subtitles.

Tropes which apply to (and are usually exaggerated for comedic effect by) Tess Masazza and her videos: