Good Is Not Soft 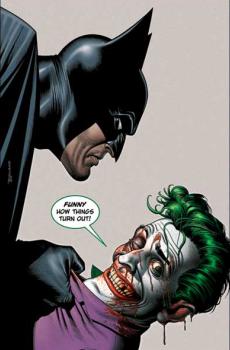 Batman, one of the most prominent examples of this trope in fiction. Also pictured: his foil and arch-nemesis, who is more Faux Affably Evil.
"If you have to look along the shaft of an arrow from the wrong end, if a man has you entirely at his mercy, then hope like hell that man is an evil man. Because the evil like power, power over people, and they want to see you in fear. They want you to know you're going to die. So they'll talk. They'll gloat. They'll watch you squirm. They'll put off the moment of murder like another man will put off a good cigar. So hope like hell your captor is an evil man. A good man will kill you with hardly a word."
— Discworld, Men at Arms
Advertisement:

Do not mistake kindness for weakness.

The character isn't necessarily an Anti-Hero, Vigilante Man or may not even be portrayed as Good Is Not Nice. He could be a genuinely friendly, sociable, caring person, always looking out for his friends and family and trying to do the right thing. Such a character would have to be compassionate to his enemies, right?

Actually, no. Unlike the Good Is Not Nice character, someone who falls under this trope actually is an amicable and affable person. It's just that this niceness doesn't extend to giving free passes to the truly vile and horrific among their enemies. They are the reason why the villain should Beware the Nice Ones, especially since they aren't gonna wait to be angered or snap before the inevitable beatdown/killing begins. The Good Is Not Soft character will find them, will stop them and (if they're lucky) will kill them before they can hit that Berserk Button. Then they'll (usually) go home to enjoy dinner and settle in for a good night's sleep.

Maybe The Hero knows that the criminal will break out of the Cardboard Prison. Maybe the villain has placed the Ideal Hero in a kill or be killed situation and the hero kills for the greater good, taking on the moral consequences of their actions. Or it may simply be the Well-Intentioned Extremist needing to Talk to the Fist before they cross the Moral Event Horizon.

This trope has the potential to slide into or be interpreted as Pay Evil unto Evil, if the hero's method of ending the villain's threat is excessively cruel. Different viewers will have different ideas about what qualifies as being excessively cruel to a villain. Even so, this trope will most likely lead to him being just as bad as the villain if taken too far.

This isn't an unusual trait of the Technical Pacifist; the Gentle Giant won't have an issue with it, either. Common in Good Is Not Dumb works. If the character is a Jerkass rather than a Nice Guy, then they fall under Good Is Not Nice. Compare/contrast Beware the Nice Ones who are reactive rather than proactive. This trope can easily fit Lawful Good characters' duties to reward good and punish evil, Neutral Good characters' often strong senses of pragmatism, and Chaotic Good characters' defiance of expectations for them to be overly merciful. See also Anti-Hero and Sliding Scale of Idealism Versus Cynicism. Compare Affably Evil where a villain instead of a hero has these personality traits. May result in the villain calling out a "Not So Different" Remark when lampshaded. Also can tie into It Gets Easier if the character is enough of an experienced killer that they are able to get on with a relatively normal life after they've pulled the trigger.