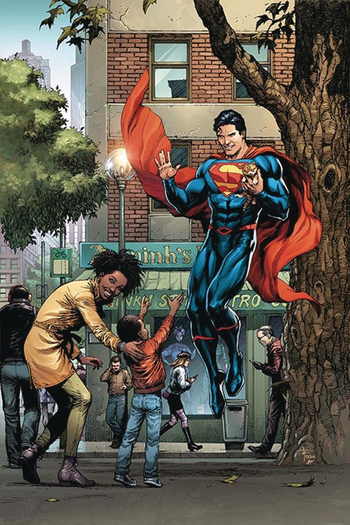 "They can be a great people, Kal-El, if they wish to be. They only lack the light to show the way. For this reason above all, their capacity for good, I have sent them you... my only son."
"Somewhere, in our darkest night, we made up the story of a man who will never let us down."
— Grant Morrison on Superman
Advertisement:

The superhero as an ideally good person. Generally associated with older protagonists and often invokes elements of the Messianic Archetype. Has now become nigh-synonymous with the "classic" Super Hero. This trope is used to evoke admiration amongst other good guys in certain ways.

Capes don't need to actually wear capes (especially if Edna Mode has anything to say about it), although a distinct outfit and some kind of special ability is part of the image. The most important feature is these heroes adhere to a strict code of honor and sense of authority; capes can be notoriously inflexible and perceive things in black and white, and even be painfully straightforward and selfless. They often downplay their own heroism and will act heroically even when no one will know. They almost universally subscribe to Thou Shalt Not Kill. Capes usually have secret identities, but make public appearances in costume and actively try to keep a good public image. While they’ll likely be adored by the public and a Friend to All Children with a reassuring sense of charisma, they're also extremely likely to be a Humble Hero, pointing out others they say are The Real Heroes.

One major reason for this is it serves as self-imposed safety to keep them from abusing their powers. Most Capes have Evil Counterparts who do whatever they want and eventually devolve into villains. A second is to set an example for others to follow, as in the page quote and image quote.

Capes are usually born with their powers, or get them in a unique fashion (or are given them to act as champions of Good). Though this is not absolutely necessary; it's the mindset (or self-perception) that's critical.

Capes are contrasted with the The Dark Age of Comic Books which saw the emergence of vigilantes and Anti Heroes who have become more extreme (sometimes to ludicrous effect), mainly as a response to the perception of comic books as "kid stuff." Nearly all Super Hero series eventually address the idea that Capes and Badass Normals have unspoken issues: Capes can impose their morality because they have the power to back them up. In a setting where Capes and Anti-Heroes coexist, the former usually consider the latter to be unstable, amoral Smug Supers. In more cynical universes, the Smug Super might consider himself to be a Cape, but very much isn't.

If they do have powers, expect them to be a Flying Brick.

See Superheroes Wear Capes for the actual wearing of capes.

Sub-Trope to Ideal Hero. Notes that while there is significant overlap between the two archetypes, they can best be differentiated by their subtle expressions: an Ideal Hero is someone with an iron-clad understanding of right and wrong that's always aligned with what helps the most people.

Meanwhile, the Cape is more accurately described as "The People's Hero," with a more wholesome and approachable demeanor, who inspires others, and tries to get them to believe in themselves.

Compare the Knight in Shining Armor (the medieval version of this character), Captain Patriotic, The Paragon, The Paladin.

Compare and contrast with The Cowl.

If you're looking for NBC's canceled series of the same name, go here.