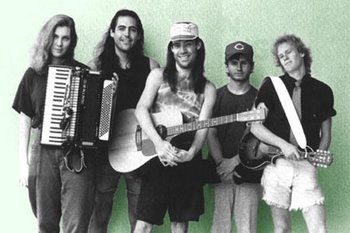 Once, there was this kid who
Got into an accident and couldn't come to school,
But when he finally came back,
His hair... had turned from black into bright white.
He said that it was from when the cars had smashed so hard.
"Mmm Mmm Mmm Mmm"
Advertisement:

Crash Test Dummies is a Canadian Alternative Rock/Folk rock band. Although they first hit it big in Canada with the mournful "Superman's Song," they are best known for their hit "Mmm Mmm Mmm Mmm", a song that showcases lead singer Brad Roberts' distinctive bass voice, as well as his frequently bizarre lyrical subject matter and style.

Not to be confused with The Incredible Crash Dummies.