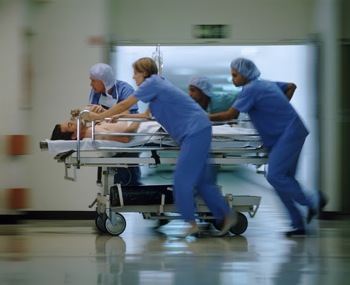 , being pulled down a long corridor into an operating room, with assorted doctors and friends surrounding him. This whole thing is often accompanied by a POV Shot of our character looking up at a doctor.

When the place the gurney is headed is more sinister, our character may be strapped to the gurney to struggle. Compare Ambulance Cut.