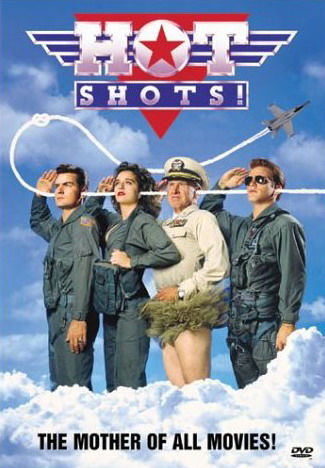 "You risked the lives of some damn fine pilots! And that's my job!"
— Admiral Benson
Advertisement:

In a World… full of serious action movies, filled with huge explosions, improbably hot women, and angsty, tortured heroes with tragic backgrounds, one man stood up against the status quo and said, "No more! We don't have to sit here and endure the same plot over and over again! We deserve something more! Something better!" And he took the same plot we had seen over and over again, and made us see it yet again, only this time, it was different... it was funny. It was... Hot Shots!

That man... was Jim Abrahams. And he is insane.

As one-third of the team that forever spoiled the airline disaster movie with Airplane!, Abrahams takes the fighter pilot action movie and turns it into something a couple degrees off center, just enough to catch us off-guard. At first blush, it appears to be a serious action movie, but then the whole thing spirals off into chaos.

Charlie Sheen stars as Topper Harley, an ex-Navyman who left the armed services to live with the Native Americans after the tragic death of his father. He is called back into service by Admiral Benson (Lloyd Bridges) to help save a mission that is being sabotaged by a greedy weapons manufacturer. In the meantime, he must locate Saddam Hussein's cache of nukes and, more importantly, win the heart of his therapist, Ramada Thompson (Valeria Golino), away from a rival pilot, Kent Gregory (Cary Elwes).

"I can take care of myself!"

Hotshot naval aviator Topper Harley disregards his psychiatrist's warning, to his own detriment

"I can take care of myself!"

Hotshot naval aviator Topper Harley disregards his psychiatrist's warning, to his own detriment