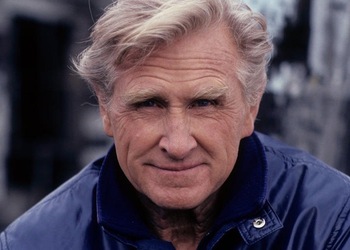 "I'm foremost an actor. I feel embarrassed being compared to the guys who really work at it. I fake it, I make believe I know all about it, which is what you're supposed to do as an actor."
Advertisement:

Lloyd Vernet Bridges Jr. (January 15, 1913 – March 10, 1998) was an American film, stage, and television actor who starred in more than 150 feature films and many television series over a sixty-year career. He was the father of actors Beau Bridges and Jeff Bridges.

Bridges was born in San Leandro, California, and graduated from Petaluma High School. He went on to study political science at UCLA. His Broadway debut was in 1939 in a production of Othello. In 1941, he joined the stock company at Columbia Pictures and played small roles in features and short subjects, but left during World War II to enlist in the United States Coast Guard. Following his discharge, he returned to acting, but continued to support the Coast Guard and was made an honorary Commodore.

He first gained wide recognition as Mike Nelson (no, not that one) in the 1958–61 television series Sea Hunt, and from there went on to have a prolific career in television and film, mainly in dramatic roles and parodies thereof.

He died of natural causes at the age of 85.

Tropes related to this actor: