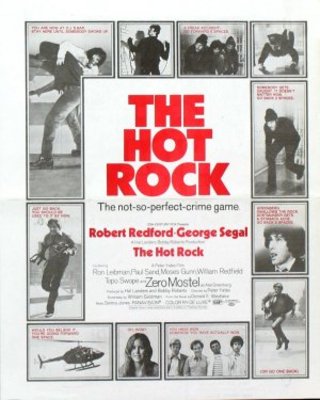 "How many times does it take to steal the same diamond?"
— Tagline
Advertisement:

The Hot Rock is a 1972 comic caper film written by William Goldman and directed by Peter Yates, starring Robert Redford, George Segal and Moses Gunn. The film was based upon Donald E. Westlake's novel of the same name, which introduced his long-running Dortmunder character.

John Dortmunder (Redford) has just been released from his latest stint in prison when he is approached by his brother-in-law, Andy Kelp (Segal), about a prospective job offer: stealing a valuable diamond that is on display in a Brooklyn museum. The stone originated from an African nation, where is was stolen by a rival country during colonial times, and has been re-stolen on multiple occasions since. After a meeting with The Backer, Dr. Amusa (Gunn), who is interested in the stone because of its significance to his people in Africa, Dortmunder reluctantly agrees to the heist, and he and Kelp are joined by driver Stan Murch (Ron Leibman) and explosives expert Allan Greenberg (Paul Sand) to pull off the job. Although the plan (and each subsequent plan) basically works, something always seems to go awry, and the crew is forced to steal the diamond again and again.

The Hot Rock contains examples of: