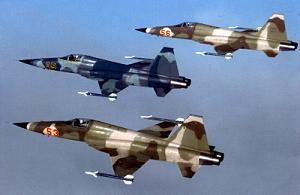 We're ready for our close-up.
Advertisement:

When massive battles are staged for war movies it can be a major problem gathering historically accurate hardware for the scenes. Many classic weapons systems are unavailable for film use either because there are no more functioning examples or the equipment in question is owned by hostile states who aren't going to allow Hollywood to play with their toys. So what's a producer to do?

Make the most of what you've got. If all you have is friendly hardware, then you issue it to everybody.

This trope is fading with CGI able to provide any weapons system you need. Furthermore, Soviet equipment like T-34, T-55, and T-72 tanks are increasingly available for discount prices, as well as on loan from US-friendly former East Bloc states such as Poland and the Czech Republic. This can replace German equipment in World War II movies also, as the Germans and Soviets extensively studied each others' equipment: if a T-55 with cheap wooden and plastic add-ons is painted to look like a Panther, even many military buffs will be fooled.note Except when the undercarriage is shown in detail — the German late WWII-style of interleaved road wheels was rather bothersome in practice, and so it was not copied after the war. But prior to its development it was not uncommon to see German Panzer divisions equipped with repainted American M47 tanks, the Luftwaffe flying P-51 Mustangs or Soviets flying Republic F-84 Thunderjets. Japanese Zeros were often played by North American T-6 Texan planes. One can even occasionally see a VW Type 181 Thing/Safari/Trekker from The '70s subbing for a World War II Kuebelwagen, even though the latter are by no means hard to come by. Warships (before CGI) were the most challenging, because they aren't to be found in enthusiasts' garages or even museum collections; filmmakers historically had to rely on models, wartime stock footage (often an Anachronism Stew), or, if Backed by the Pentagon, wildly inappropriate modern ships.

This trope also extends to individual weapons; many films and television shows will commonly have Chinese-made Norinco Type 56 assault rifles substituting for genuine Russian-made Kalashnikov rifles, and a German Walther PPK can occasionally stand in for a Russian Makarov pistol. It's also not uncommon for western films to feature Browning M2 heavy machine guns dressed up to look like a Soviet DShK.

Granted, except for the most obvious cases, most people (beyond a few military hardware aficionados) probably aren't going to know the difference either way.

Somewhat surprisingly, the obvious solution is rarely used: the "enemy" uses "friendly" equipment because they have limited resources and use captured equipment. Militaries do this a lot in real life when at war, particularly during World War II.