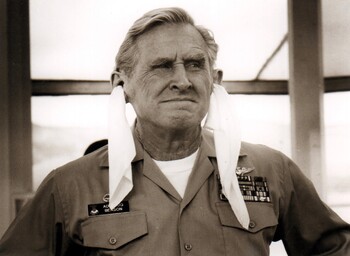 "I'm proud to say I've written another insane admiral. They must put something in the water at Federation Headquarters."
— Ronald D. Moore, on his creation of Admiral Pressman for Star Trek: The Next Generation
Advertisement:

In fictional military settings, the brass tend to be a bit unstable. Frequently they become so obsessed with their own pet projects that they endanger national security. Other times their brazenness and/or paranoia almost leads to wars breaking out between rival superpowers. They may be a Conspiracy Theorist with authority investigating the heroes, an Obstructive Bureaucrat making hell for the heroes, or they may be covering up for their own wrongdoings. These are the ones most likely to send the heroes on a dubious mission. They could be a General Ripper obsessed with the enemy, or they could be cowards who fear public exposure of their own wrongdoings.

All this insanity might make their organizations look incompetent, but presumably the Insane Admirals are just the ones we see... 95% of the brass in any given organization are probably decent folk, but spend their time rubber-stamping military contracts and attending state functions, and never do anything 45-minute drama-worthy. Please note this applies only to officers who are at command level, no one below the rank of Naval Captain/Army Colonel/Airforce Group Captain applies here, see The Neidermeyer and Sociopathic Soldier for those.

The unfortunate combination of Bad Boss and We ARE Struggling Together. General Ripper is a major Subtrope of this. And see also Kicked Upstairs, which is frequently how they end up getting to be Insane Admirals instead of insane forty year-old ensigns. For competent brass, see The Brigadier or Reasonable Authority Figure. Senior officers who manage to be both at once fit best under Bunny-Ears Lawyer.

Note that this trope is a Defied Trope in Real Life armed forces, especially in democratic countries and particularly in the modern era where it's less likely that mental instability would go unnoticed. Mentally unstable officers jeopardize lives of thousands of soldiers, and pose a heavy risk on the success of the operations themselves. Mentally unstable officers are usually quickly transferred to non-combat positions or forced into early retirement. In fact, citing mental instability is usually the only legal way for their subordinates to remove a superior officer, specifically because it's so dangerous. None of this necessarily has an impact on competence of the armed forces, of course, which is a different matter.