Recap / Star Trek: The Next Generation S1E15 "Too Short a Season" 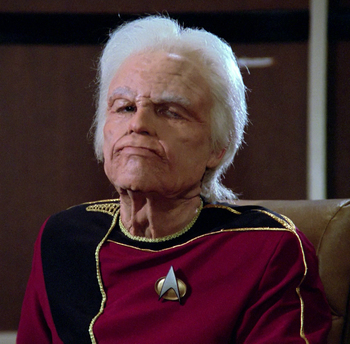 Boy, when Clayton Rohner reaches his late eighties, this make-up will look really, really awkward. (Not that it doesn't look awkward now, but still)

The Enterprise transports a legendary geriatric admiral who must once again negotiate a Hostage Situation involving a man from decades earlier in his career. While the Admiral is mysteriously growing younger by the day, a dark secret from his past threatens to not only kill him but potentially the hostages as well.