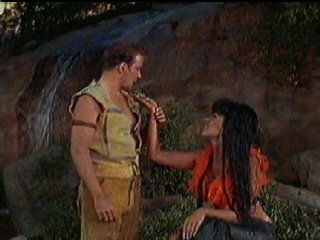 Kirk, Bones and Spock beam down to a peaceful, idyllic planet where some years previous Kirk had befriended a native called Tyree (Michael Witney). Kirk intervenes when he sees a group (including Tyree) about to be ambushed by a rival group armed with flintlocks. Which is odd, because this society is supposed to still be in the Bronze Age. In the ensuing melee, Spock gets shot and has to be taken back aboard the Enterprise.

While Spock convalesces, Kirk and Bones beam back down to investigate this on going war. It seems those darn Klingons are at it again! They convinced one faction of natives that they could be more powerful than the others. All they needed was better weapons. As if dealing with them wasn't bad enough, there are these critters called the mugato to contend with. Kirk gets poisoned by one. Fortunately, Bones is able to get him to Tyree's tribe, where his wife Nona (Nancy Kovack) is able to heal Kirk.

But Nona's services are not free. She insists that Kirk give her a weapon more powerful than what the Hill People have. And what Nona wants, Nona gets.