Recap / Star Trek: The Next Generation S1E16 "When the Bough Breaks" 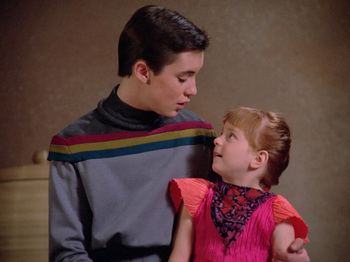 "Come, child, and I shall tell you the 3,047th time I Teen Genius'd the ship out of certain disaster."
Advertisement:

The planet Aldea, formerly existing only in legend, uncloaks and requests help from the Enterprise. Aldea's inhabitants are technologically advanced, but sterile, and want to adopt children from the Enterprise. By force, if necessary. But the Aldeans are certain that sharing their advanced knowledge is a perfectly reasonable compensation for cradle-robbing! Naturally, Picard disagrees.

Seven children chosen for their "special" potential, including Wesley, are beamed straight out of their classrooms and quarters. The rest of the episode concerns both their own and the Enterprise's efforts to convince the Aldeans that this really isn't a workable solution to their problems, honestly, and to subvert their technological advantage in the meantime.

Tropes featured in "When the Bough Breaks":