Recap / Star Trek: The Next Generation S2E18 "Up the Long Ladder" 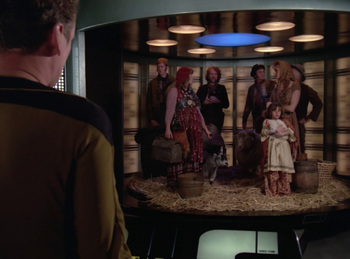 O'Brien beams up the Bringloidi, and Colm Meaney dies a little inside.
Advertisement:

Picard calls Riker into his ready room and plays a beacon that's been transmitting from deep in space for a month. They agree that it sounds like an SOS code, but it’s a Terran code that hasn’t been used in centuries. Data discovers that the code comes from the planet Bringloid V, home to a colony founded on the philosophy of returning to a pre-industrial way of living. On the way there, Worf briefly falls ill, and Pulaski covers for him, earning his thanks.

Upon arrival, the ship discovers that solar flares from the planet's sun are threatening the colony, so they decide to evacuate the inhabitants, the Bringloidi, to the ship. To the crew's dismay, the Bringloidi turn out to be ridiculously stereotypical Irish farmers. Picard and Riker meet their cheerful, folksy leader, Danilo O’Dell and his beautiful, feisty daughter Brenna. The crew struggles to contain the Bringloidi's attempts to convert the cargo hold into a makeshift farm, and Riker puts the moves on Brenna, while Picard learns from Danilo of a second lost colony that was also founded by their old ship.

They find the second colony, Mariposa, easily enough and make contact with its prime minister, Wilson Granger, who invites them down for a visit, but Troi cautions that there’s something he’s not telling them. Riker, Worf, and Pulaski beam down to the colony, which is much more technologically advanced than the Bringloidi society, and they notice quickly that everyone they encounter looks alike. Pulaski deduces that their entire population is made up of clones, and Granger confirms it. He explains that only five of the original colonists survived, and cloning was the only way for the colony to continue, but Clone Degeneration will wipe them out within the next few generations. He asks the bridge crew for their genetic material to renew their clone stock, but Picard states that no one onboard would agree to such a thing. Instead, they agree only to repair some of their equipment before moving on.

The Mariposans kidap Riker and Pulaski and steal their genes, leaving them with no memory, but when Granger claims to have not seen them, Geordi picks up on the lie using his VISOR, and the truth quickly comes out. Riker, Pulaski and Geordi beam down and destroy the clones already being made from their genes. Granger confronts them, arguing that the Mariposans have a right to avoid annihilation. Picard is now stuck with two problems: a wild and rustic group of settlers with no home, and an advanced civilization in desperate need of fresh blood. It doesn't take a genius to realize that these problems solve each other.

Picard organizes a sit-down between Danilo and Granger. They instantly hate each other and point out all the problems that trying to coexist with each other will entail. But once Danilo discovers just how much screwing will be required to rejuvenate Mariposa, he warms to the idea. The Mariposans have foresworn all sexual interest and find the idea repugnant, but Danilo assures Granger that nature will take its course. The two sides agree to join forces. Finally, Picard convinces Brenna to provide her leadership to the new society, and she quickly decides that Granger, a man of importance, will be one of her husbands.