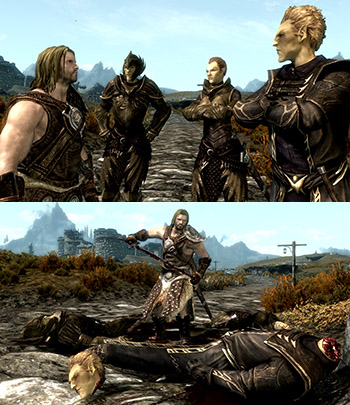 The Thalmor came to prove the supremacy of Mer over Man. The Last Dragonborn had a few strong words for them.
The Warden: Elves have strange powers.
Sten: Being easily conquered does not constitute a "power."
— Dragon Age: Origins
Advertisement:

As Can't Argue with Elves is such a frustrating thing to many human viewers (and most viewers are human), the trope of humans telling and occasionally showing arrogant magical races exactly where to stick it is popular. If humans don't do it, the Dwarves will be happy to. For this reason humans and dwarves tend to get along much better in fiction.

This trope is not pornographic; well, usually not pornographic. Screw You, Elves! also doesn't apply when the elves aren't stuck-up in the first place, or when elves fail at something but no one In-Universe rubs their nose in it.

Then later he melts the other one's eyes. Turns out maybe your diplomatic position should be a little more accommodating when the other guy is backed by some crazy giant god-tiger and you live a world of Grey-and-Gray Morality. Luca is correct in that his people suffered greatly, but the men responsible for such atrocities are dead, and there is no evidence whatsoever that the current government of Caris had any involvement with those crimes (though that may change in the future).

Alternative Title(s): Shut Up Elves, Can Argue With Elves