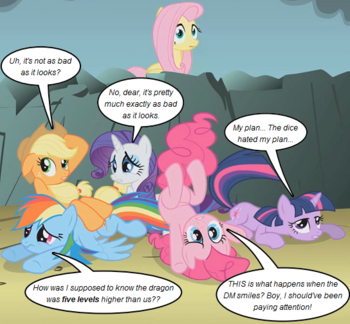 The Magic of Critical Die Rollsnote  For those who can't read the text: Applejack: Uh, it's not as bad as it looks? Rarity: No, dear, it's pretty much exactly as bad as it looks. Twilight Sparkle: My plan... The dice hated my plan. Rainbow Dash: How was I supposed to know the dragon was FIVE LEVELS higher than us? Pinkie Pie: THIS is what happens when the DM smiles? Boy, I should've been paying attention!
Advertisement:

is a Campaign Comic that follows that story of six girls as they play through a new Dungeons & Dragons campaign setting, one that just happens to closely resemble My Little Pony: Friendship Is Magic. The girls behind the ponies range from a The Roleplayer to a Psychopath and from experienced gamers to a pair of Newbs. The players themselves have not been named, and of particular note is the fact that the comic is explicitly set in the Dungeons & Dragons universe, using 4e rules.

The website includes a Shout Box popularly used by readers to recite and discuss moments from their own games related to the topic of the day's strip.

The author of the comic also hosts a semi-weekly livestream role-play podcast known as Fallout Is Dragons, which also involves ponies and tabletop roleplaying.

Also has a voiced-reading of the comic found here.