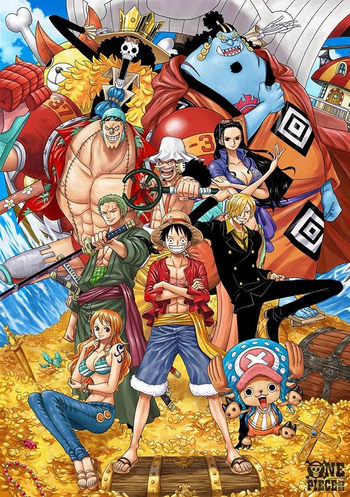 We Go!Characters Clockwise from the center: Monkey D. Luffy, Nami, Roronoa Zoro, Usopp, Franky, Brook, Jimbei, Nico Robin, Vinsmoke Sanji, and Tony Tony Chopper. Not pictured: Over one thousand supporting characters.
Wealth, fame, power... Gold Roger, the King of the Pirates, attained this and everything else the world had to offer. And his dying words drove countless souls to the seas.
"You want my treasure? You can have it! I left everything I gathered together in one place! Now you just have to find it!"
Advertisement:
These words lured men to the Grand Line in pursuit of dreams greater than they've ever dared to imagine! This is the time known as the Great Pirate Era!
—Opening Narration

Welcome to the best-selling single-author comic in the world, as acknowledged by the Guinness World Records themselves.

One Piece began as a manga series written by Eiichiro Oda since 1997, and in 1999, it was adapted into an ongoing popular anime series produced by Toei Animation. The story chronicles the adventures of Monkey D. Luffy, an ambitious yet kind and rather dense young man who has eaten the Gum-Gum Fruit (Gomu Gomu no Mi), turning him into a Rubber Man. He dreams of following in the footsteps of his childhood hero, Captain "Red-Haired" Shanks, by becoming a great pirate. In fact, he plans to find the titular treasure and become the new "Pirate King." Said treasure was left by Gold Roger, the greatest pirate who ever lived and the previous Pirate King, and his dying words have spurred the world of One Piece into an age of piracy, as pirates from all around the world set sail for the Grand Line, the place where the One Piece is most likely hidden.

To obtain his goal of becoming Pirate King, Luffy has assembled one of the strongest (not to mention weirdest) pirate crews in the world, consisting of:

Together, the group of True Companions known as the Straw Hat Pirates travels the world, making their way to and through the Grand Line, facing villainous rival pirate groups, Marine forces, and corrupt elements of the World Government. Much of the mysteries surrounding the events of the storyline concern not only where Gold Roger hid his treasure, but why he did, what happened in the True History of the world, why the World Government wants to hide it, and what "One Piece" actually is.

The big gimmick to the series is that many characters, including Luffy, have consumed a "Devil Fruit". Devil Fruits are mysterious fruits that grant the sole consumer incredible powers, at the cost of the consumer losing their ability to swim by draining their energy when submerged in water. Luffy, for example, has eaten the Gum-Gum Fruit (or the Gomu Gomu no Mi if you're feeling Japanophilic), turning him into a Rubber Man capable of stretching his body like elastic. The powers granted by the other Devil Fruits are a varied bunch, from producing natural soap to transforming into a giraffe-human hybrid, to becoming a being made of living ice.

It has numerous specific pages:

Joking aside, it's no exaggeration at all to say that One Piece is the Dragon Ball of the early 21st century.note In terms of sales it eclipsed even Dragon Ball by a margin of over 110 million volumes sold, though that's in part due to its sheer length. Despite being only roughly half-finished as of Summer 2014, it has 74 volumes to Dragon Ball's 42. It's the single biggest and most influential manga franchise in a generation.

The anime has a troubled distribution history in America. In 2004, 4Kids Entertainment dubbed the first 142 episodes (edited into 104 episodes), but the dub ended in 2006 and stopped being reran in 2008. It returned to U.S. airwaves from May 18, 2013 to March 18, 2017 via Toonami on Adult Swim note  Unfortunately, Adult swim dropped the series citing a "variety of reasons, up to and including Toei increasing broadcast fees and rating issues" , this time being dubbed by Funimation. Funimation's English dub, which has covered 500 episodes and counting, has become one of the longest anime dubs in history. At the time, the show was also streaming on VIZ Media's Neon Alley service, and Funimation had the episodes they acquired on their website available for members to stream, with only episodes 1 through 205 dubbed, probably because they wanted people to watch the dubbed episodes 206 onward on Toonami instead. The series would later join Netflix after its run ended on Toonami in 2018. However, in 2022, it was announced One Piece would rejoin the Toonami block once more, much to the shock and joy of fans. In December 2020, the series got its own channel on the Pluto TV app, though in this case sub only note Pluto can't really add dubs due to distribution rights with only a few exceptions (Shows by 4Kids. And, no, the channel doesn't play their dub version.). Needless to say, you have a lot of options on where to catch the series now.

But wait, there's more. It seems that Hollywood has taken an interest in the series as, to coincide with the 20th anniversary of the franchise on July 21, 2017, it was announced that One Piece would be getting a live-action television series

from Tomorrow Studios (the same ones producing the Cowboy Bebop live-action series), and it will be co-executive produced by Oda, along with Marty Adelstein and Becky Clements. Nearly three years later, on January 29, 2020, Oda himself announced the show would be airing on

Netflix, with a 10 episode order for the first season. In late 2021, five of the show's leads were officially cast.

If you are watching the English dub or haven't read the manga, there are spoilers below.

Example of:
Faceplanting into Food