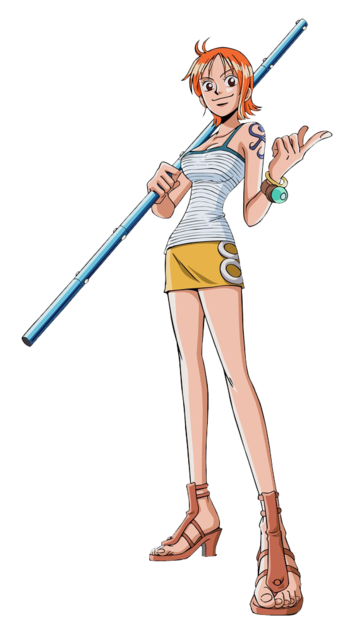 "What good is treasure if I'm all alone? I'd rather have nothing at all!"

The eighteen/twenty-year-old navigator of the Straw Hat Pirates and the second of Monkey D. Luffy's recruits. Nami is initially introduced in Orange Town as a thief who detests pirates and steals from them, tagging along with Luffy with dubious loyalty to him. The reason for her thievery is because her surrogate home, the Conomi Archipelago, was occupied by the Arlong Pirates for eight years. While serving as the cartographer for the Arlong Pirates, she wishes to buy her home back from Arlong for one hundred million berries and steals from pirates in order to do so. When Luffy frees the archipelago from Arlong's grip, she joins the Straw Hats for good.

Nami is an exceptional navigator, able to read the weather with perfect accuracy then give instructions to pilot the ship through any storm, and is responsible for showing the way to each island. Although Nami isn't strong like her crewmates, she uses a weapon called the Clima-Tact (which Usopp later upgrades into the Perfect Clima-Tact and after the Time Skip becomes the Sorcery Clima-Tact) to manipulate the weather on a small scale, giving her a great range of tricks and attacks. Her thievery skills are also quite useful from time to time. As the crew's priorities lie more on seeking adventure than actual piracy, she also takes on the role of ship's purser, ensuring that they have enough money to purchase food and supplies for their voyages.

Nami's years of thievery have given her a sly and wily personality, as she isn't above taking advantage of or blackmailing her own crewmates. Despite these greedy personality traits, she is still very loyal to the crew, though they do get on her nerves from time to time. She is often the only member of the crew other than Zoro to personally confront or remind Luffy of the deep, gut-wrenching choices that he must face. She also has a gift in cartography, and her dream is to draw a map of the world.