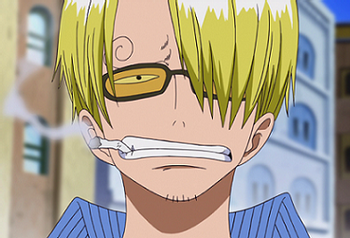 That cigarette must be made of tissue paper.
He smoked incessantly but the weird thing, Carrot noticed, was that any cigarette smoked by Nobby became a dog-end almost instantly but remained a dog-end indefinitely or until lodged behind his ear, which was a sort of nicotine elephant's graveyard.
— Guards! Guards!
Advertisement:

Many fictional characters who smoke cigarettes often demonstrate a peculiar ability: any cigarette they light — even if it was just taken from a completely fresh pack — is instantly crumpled and bent out of shape.

Characters who are wealthy or otherwise "fancy" seem to be immune to this, particularly Femme Fatale characters. Presumably they're buying a more expensive brand, but even the cheap ones are evidently more expensive than the cigarettes you can buy in Real Life, which are extremely difficult to crumple up without breaking them and rendering them unsmokable.