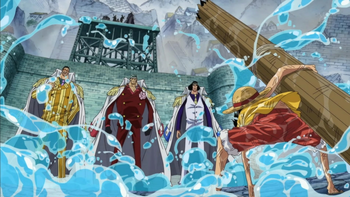 "I'm going to save you even if it kills me!"
Advertisement:

Ah, One Piece, a series in the high seas where physics are ignored unless they add to the awesomeness; what with the Pirates and World Government clashing with one another constantly. It's the number one best selling manga for a reason.

It won't be easy listing all of the hardcore moments this series brought us, but we'll sure as hell try.

WARNING: All spoilers for the series are unmarked.