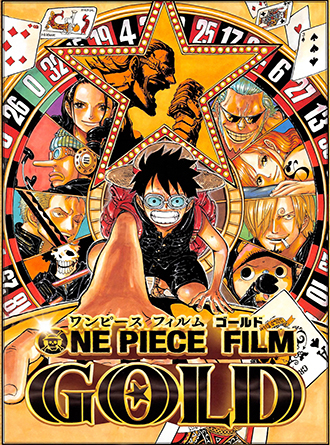 Hit or Bust!* Clockwise from the bottom left: Brook, Roronoa Zoro, Usopp, Nico Robin, Gild Tesoro, Franky, Vinsmoke Sanji, Tony Tony Chopper, and Monkey D. Luffy.
♫ One, two, three, kick off the beat, it's time to start the show.
Let's take it nice and slow.
Five, six, seven, are you ready to leave your cares behind?
Just let it all unwind.
An angel and a devil will open up the door.
They'll give you everything you want,
But keep you begging for more.
Like they say, life is a roulette, so let the money flow.
Gran Tesoro. ♫
— "Gold & Jive ~ Silver Ocean"
Advertisement:

One Piece Film: Gold is the 13th film, and 3rd Film label, in the manga/anime series, One Piece.

The movie sees the Straw Hats arriving at the Gran Tesoro, a cruise liner so huge it's considered its own nation, that houses a massive casino, run by the Gold Emperor, Gild Tesoro. However, what starts off as a simple stop for some R & R and extra dough turns serious when Tesoro puts the crew in his crosshairs and they quickly find out that Gran Tesoro houses a dark secret beneath its glitz and glamour, leading into a battle against Tesoro and the Gran Tesoro staff.

As with Strong World and Z, Oda was on hand to help supervise the film. Also as with the aforementioned movies, first-time attenders in Japan received a special manga volume as a bonus; this time volume 777 (as in Triple 7, not a literal volume 777). It also has a tie-in special anime episode, Heart of Gold, which aired on July 16th, 2016, as well as the usual tie-in anime filler arc, The Silver Mine arc.

The film was released in Japan on July 23, 2016. In a major first for the series, the movie was also announced for numerous international releases (some nations dubbed and other using the original Japanese language with subtitles), including the United States. Eventually the U.S got a limited theatrical run of the movie from January 10-17 in 2017, complete with a fully English dub. This made Film Gold the fourth One Piece movie to be dubbed, following after Episode of Alabasta, Strong World, and Film: Z.

A Blu-Ray release of the dub, along with an English version of "Heart of Gold," was released on May 2, 2017.