Spoilers for One Piece Chapter 0 Strong World and all One Piece works preceding this one will be left unmarked. 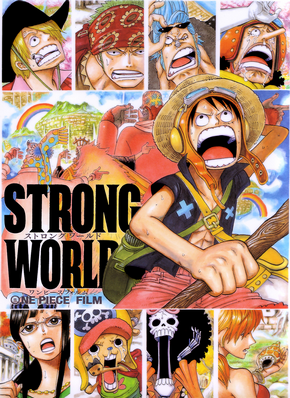 Survival of the fittest, huh?
Advertisement:

One Piece Film: Strong World is One Piece's tenth movie, written by Eiichiro Oda himself. As the movie was made in celebration of the franchise's tenth anniversary, Toei personally asked Oda to write the script.

The Straw Hats receive news that their hometowns in East Blue are in trouble and decide to put off adventuring to go help out, only to meet a mysterious flying pirate ship, led by the infamous pirate Golden Lion Shiki, the same pirate who managed to escape the inescapable undersea prison Impel Down and stands among Gold Roger and Whitebeard. After abducting Nami for her navigational skills, Shiki sends Luffy and the rest of the crew hurling down to his personal flying islands. There, the separated Straw Hats find themselves in a battle for survival with terrifying beasts.

The film received an English dub from Funimation in November 2013. At the time, the dub of the TV series hadn't yet reached the Thriller Bark arc, so the dub of this film marks Brook's English-speaking debut

See also Little East Blue Arc, a somewhat related mini-arc of the anime that takes place before and leads into this movie.