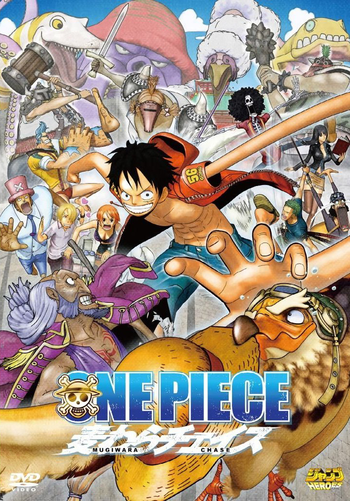 One Piece 3D: Straw Hat Chase is the eleventh film in the long runnning anime and manga series, though many fans consider it more of a special than a film as it returned to the Short Film format (30 minutes) and was paired with a Toriko film in the summer of 2011. Regardless, it is the first One Piece film to be made entirely in CGI.

The film begins with a old pirate, Schneider, and his dog, Buzz, walking the streets one night. Schneider has been coughing up blood lately and takes it as an indication the he's dying. He tries to part with Buzz, not wanting his old friend to see him die, but Buzz will not be shaken off easily.

Out on the seas, the Straw Hats are going about their journey when Luffy finds that his prized straw hat is missing, sending him into a frantic search around the ship. Unable to find it the crew assumed it fell into the ocean and search individually for it with the Soldier Dock System. Ussop and Chopper happen upon Schneider's ship, finding the weakened pirate onboard. As they take him back to the Sunny Go to get healed, an eagle lands on the ship with Luffy's hat in its mouth. Needless to say, once Luffy finds out he goes on the warpath to get it back, chasing the eagle through various landscapes and obstacles. But why does the eagle want the hat in first place and what does Schneider have to do with this?

Although it hasn't been dubbed, the film received a North American theatrical release in 2021 alongside a limited re-release of One Piece Film: Strong World (under the name "Mugiwara Chase").note While there were "subbed" and "dubbed" screenings of Strong World, both played the subtitled version of Mugiwara Chase.

One Piece 3D: Straw Hat Chase has the following tropes: