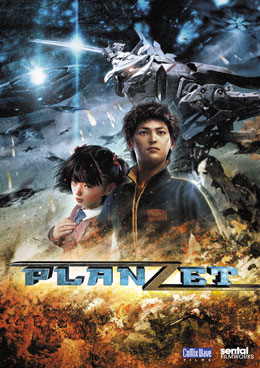 Planzet is a 2010 CGI movie by the same writer/director of Negadon: The Monster from Mars, to which this film bears many similarities.

Taking place in the near future, Earth has been ravaged by mysterious aliens known as the FOS. Although the planet is now protected by a "diffuser field", an operation to strike back at the enemy, known as Planzet, requires the field to be shut down while the secret weapon is being prepared, which will leave Earth defenseless. It's up to three giant robot pilots -Taishi, Ken and Kaori- to defend their base, with the fate of humanity hanging in the balance.