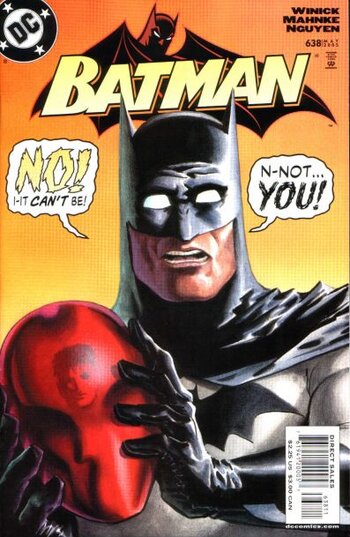 The pivot in many plotlines is the Reveal. A character is revealed as another character's father, a god, or secret suitor or arch nemesis in disguise. More broadly, the audience is given new information which had been withheld to create suspense. The Reveal changes the nature of the plot, often pushing it from suspense towards action. A good reveal will also create a new set of questions and further suspense. On some occasions, The Reveal Prompts Romance.
Advertisement:

A key moment in most Gambit Pileup plots, when the heroes or the audience discover how the villains have been manipulating everyone. Can also be used to make a cliffhanger more dramatic. Myth Arc and Mind Screw series love springing these; Jigsaw Puzzle Plots pretty much require them. Eventually necessary for a Mysterious Employer.

The Reveal is in fact a rather easily explained trope. A lot of mystery stories wouldn't work without either the criminal or the detective explaining how the crime was committed, and a lot of other plots would leave people with more questions than answers if they never bothered to explain the plot to other characters... and by extension, the viewers. It's easy to explain it off-screen, but doing so would confuse the viewer and make them think they missed something.

If you're set up for this but it's then subverted by not revealing it, it's The Un-Reveal. When made too obvious ahead of time, it's The Un-Twist, a Captain Obvious Reveal, or an Obvious Judas (depending on how it happens). If it comes out of nowhere, it's an Ass Pull and/or a case of The Dog Was the Mastermind. If the thing revealed is named in the title, then it's The Namesake. If a Driving Question is involved, this is where it's finally put to rest. If it happens in the first episode of a series, it's probably a First-Episode Twist. Can overlap with Remembered Too Late, Wham Episode and Wham Line.

Compare Internal Reveal when the audience was in the loop all along and only characters in-universe are taken by surprise. Not to be confused with the R.E.M. album Reveal.

Aristotle referred to it as anagnorisis (generally translated as "discovery" or "recognition") in his Poetics, making this one Older Than Feudalism.

Warning: Expect every example listed below to be a spoiler for something. Since the title alone can be a spoiler, proceed at your own risk.

Luz reveals to Amity why she has been Acting Unnatural throughout the Bonesborough Brawl: Today's the death anniversary of Luz's father, and she's been trying to bury the emotional pain of not having to celebrate it with her mother this year due to Luz being trapped in the Demon Realm.

Luz reveals to Amity why she has been Acting Unnatural throughout the Bonesborough Brawl: Today's the death anniversary of Luz's father, and she's been trying to bury the emotional pain of not having to celebrate it with her mother this year due to Luz being trapped in the Demon Realm.